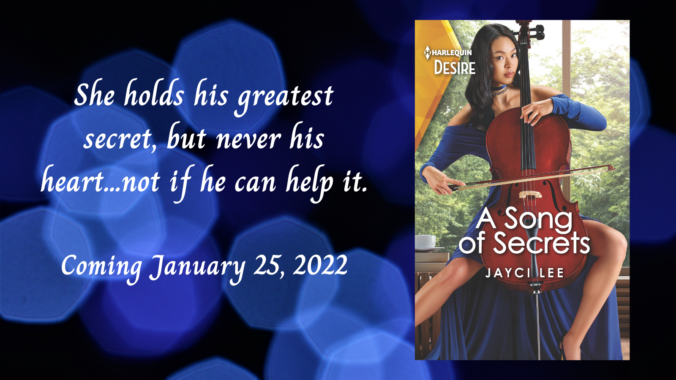 A Song of Secrets, Book 1

Her secret tore them apart.

Will his secret reunite them?

World-renowned cellist Angie Han is desperate to save her trio’s chamber music society. So when she discovers that her ex Joshua Shin is the anonymous composer setting the classical music world on fire, she asks for his help. The sexy musician agrees to an uneasy truce to protect his secret success. But when their passion reignites, Angie’s own secrets may be exposed. Will Joshua ever trust her again? And will what’s keeping them apart ever lead them to happily-ever-after?

THE HEIRS OF HANSOL SERIES

Garrett Song is this close to taking the reins of his family’s LA fashion empire…until the Song matriarch insists he marry her handpicked bride first. To block her matchmaking, he recruits Natalie Sobol to pose as his wife. She needs a fake spouse as badly as he does. But when passion burns down their chaste agreement, the flames could destroy them all…

Will they end up with more than they bargained for?

She’s done waiting for what she really wants…

“If I don’t have you after that kiss, I’ll burn to dust from the inside out…”

Aspiring fashion designer Adelaide Song wants to prove she’s more than just a pampered heiress. All she needs is a little courage—and the help of deliciously sexy Michael Reynolds, her childhood crush and her brother’s best friend. But when her secret crush turns into an illicit liaison, Adelaide realizes mixing business with pleasure spells trouble for all her plans…

Jihae Park’s icy heiress facade is quickly melting—all because of Colin Song. A fling with the sexy film producer could jeopardize her one shot at achieving her own success—and the movie they’re making together. But resistance to her searing attraction—and Colin’s breathtaking bedroom skills—proves futile. Even as Colin’s ulterior motives threaten to destroy their chance at a picture-perfect ending…

Small town baker Aubrey Choi loves her secluded country life, but a cake mix-up and a jaded food critic threaten all her hard work and her livelihood.

Celebrity food critic, Landon Kim, never writes a second review, but he refuses to allow a misunderstanding to ruin a talented baker.

The fix? Take her to California’s beautiful wine country to guest star in a food show and reveal her genius to the world. Love is the last thing on their minds, but it’s all their hearts could feel.

The secret ingredient to Tara Park’s award-winning beers? A pinch of sass and a hearty dose of kickass. But behind her humor and wit, she is running from a painful past by focusing her everything into brewing her beers. When a playboy photographer, Seth Kim, sees beyond her persona and his every touch heals her, it’ll take all her strength and competitive spirit to accept herself and dare to give love another chance.

If all goes to plan, she will check off that last box in a couple years, make her parents proud, and live a successful, fulfilled life in L.A. What was not in her plans was passing out from a panic attack during a pivotal moment in her career. A few deep breaths and a four hour drive later, Lizzy is in Weldon for three weeks to shed the burnout and figure out what went wrong. And what better place to recharge than the small California town where she spent her childhood summers with her best friend, Jack Park.

Jack Park didn’t expect to see Lizzy back in Weldon, but now he’s got three weeks to spend with the girl of his dreams. Except she doesn’t know of his decades-long crush on her–and he intends to keep it that way. She’s a high-powered attorney who lives in L.A. and he’s a bookkeeper at his family’s brewery who never left his hometown. He can’t risk their friendship on a long shot. Can he? When Lizzy decides that the local bookstore needs a little revamp, of course, Jack is going to help her bring it back to life. But the more time they spend together, the harder it becomes to ignore there might be more than just friendship among the dusty shelves and books…

Sometimes the path to the rest of your life has been in front of you all along.

Signup for updates on books, freebies, and more!

Theme by Anders Noren — Up ↑